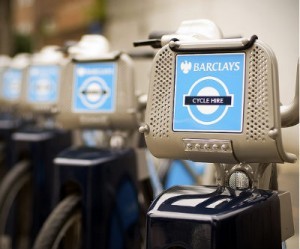 The Standard has been getting its fill of FOI requests this week — after sourcing some (slightly misleading) information about weekend Tube closures, they've also dug up some dirt on the number of accidents involving the Cycle Hire scheme.

In the first two months, there were 34 incidents involving the Barclays-emblazoned bikes, and the emergency services were called out 13 times. Some users have been hit by buses or other vehicles, one unfortunate photographer was struck by one of the trailers that redistribute bikes around town, while perhaps the most serious incident involved a young girl who was nearly crushed by a docking station that had been hit by a car (perhaps the same one that Dave Hill photographed in George St a few weeks ago).

Despite the negative tone of the Standard's piece, 13 emergencies in the first two months represents a tiny number of trips on the bikes. Ten weeks into the scheme's launch, over 90,000 people had registered, making over one million journeys; the amount of accidents is remarkably low, and suggests fact that Londoners have, on the whole, taken well to these new elements of the transport system.

The system right now is restricted to registered users, and it will be interesting to see if a rise in recorded accidents corresponds with the date on which the scheme is rolled out to casual users, which is (reputedly) scheduled to happen before the year's end.