Film Preview: Just Do It 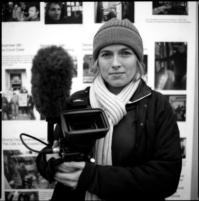 Just Do It is a new documentary by Age Of Stupid executive producer Emily James (pictured) tracking UK environmental activists as they take on the police and the establishment.

In 2005, she documented the plight of a Hackney cafe due for demolition in The Battle For Broadway Market. This time around, James and her dedicated team ran around London taking 300 hours of film following the brave men and women behind Climate Camp, Plane Stupid and Climate Rush who have protested against power stations and airports amongst other causes.

The film is in post-production and the release has been planned for next spring but, before that happens, it needs another £20,000. Up to half of that will come care of the environmentally conscious people at Lush while the rest is being crowd funded through their “£20k in 20 days” initiative. Donors are being tempted with advance downloads of the film, DVDs and tickets to the premiere. If you have more time than cash, they are also looking for people to get involved.

The official website for the film is here with details of all this and more. The film’s trailer can be seen here.