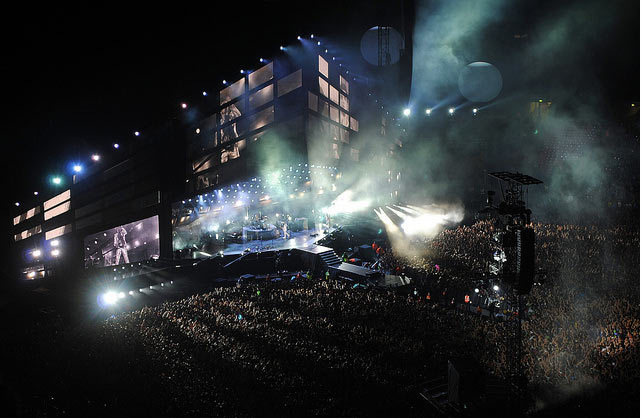 On Saturday night Muse avoided black holes and proved a revelation as their cosmic tour de force confirmed their arrival amongst the masters of the stadium rock show. Three years ago they became the first group to tackle the rebuilt Wembley and establish that both act and venue could deliver on lengthy promise. Now both are well-rehearsed in putting on these spectacles and the confidence shows.

Barnstorming songs open the set before the band reach deep back into their catalogue for older gems like Citizen Erased and Ruled by Secrecy that draw patience and immersion from a boisterous crowd, many of whom might be hearing them for the first time. The pay off is a depth to the experience that enhances the rush delivered when the established hits return and by the end it seems perfectly natural that frontman Matt Bellamy should be borne onwards and skywards atop a hydraulic platform bedecked in a suit smothered in rippling LEDs.

That ride isn't even the most ostentatious of the night, an honour that belongs to the aerialist who travels the length of one side of the stadium hidden in a balloon apparently from Roswell before emerging in a Tron-style outfit to delight patrons in the stands with some close up acrobatics on the return journey, Drummer Dom Howard and bassist Chris Wolstenholme enjoy their own trip on the platform mid-set as they riff and roll while Bellamy fetches his hybrid "keytar" for Undisclosed Desires.

The whole performance is accompanied by some beguiling video work on a set of big screens that are angled to give a fine view to all. Clearly all that time hanging round with U2 in the last few months has not been wasted, though the Teignmouth trio have so far stepped back from the complete motorised fruit experience.

Hopefully, they also had a chat with Dublin's finest about where to go from here. The band's top class songwriting and musicianship has been an open secret for some years and now they've conquered the musical Everests of regular stadium gigs and huge album sales they will, like many acts before them, need to work out how to keep things fresh while maintaining those achievements. Bellamy has hinted at a more personal scale in upcoming projects, though to satisfy demand he may need to book out the Union Chapel for a twelve month residency.