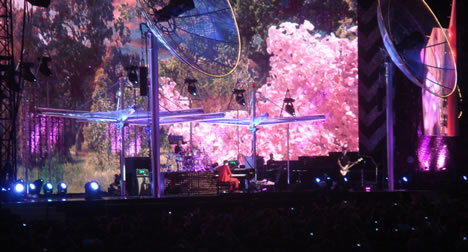 Never ones for being the most talkative on stage, Muse played the first night of their two night stand at the new Wembley Stadium with few words to the audience. This was more than made up for however, by the enthusiastic set full of surprises. If you’re going to the Sunday Muse gig I’d strongly suggest not reading the rest of this review if you want to keep it all a surprise.

Going back to the start however and Rodrigo Y Gabriella surprised many in the audience who had slated their unique brand of Mexican acoustic guitars to not work in a stadium. However work they did as they perhaps managed to out-perform Dirty Pretty Things who followed them up, putting in a decidedly average performance, playing lots of new material and seemed to get the crowd going less than Rodrigo Y Gabriella did.

The last support was The Streets who managed to get everyone going perfectly, creating a bit of a party atmosphere as he confided in the 90,000 strong crowd that he has a yearning to be like Freddie Mercury, leading to a mass sing-along. Wheeling out all of his well known material, he did a storming job of warming everyone up, however did manage to jinx it my proclaiming that “there definitely won’t be any rain” – come the second half of Muse’s set, rain it does.

Finally the time came for what we’d all paid for. Muse. Set amongst a futuristic stage of Satellite Dishes, giant light-up balloons and a video screen that makes your brand new top of the range plasma look like something your Gran should own, they really had outdone themselves with the set. Twenty minutes late the stage lights dim and searchlights go round. Smoke oozes out and yet no Muse. Instead, they arrive from the back of the sound stage in the centre of the stadium, in a blast of tickertape that is still coming down four songs in. 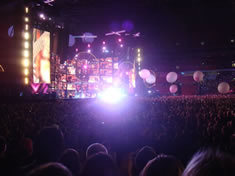 Walking through the walkway set in the middle of the standing area, they reach the stage, immediately launching into “Knights of Cydonia” and “Hysteria”, which got everyone going nicely before launching into “Supermassive Blackhole”, sending those in the crowd not already going ape over the edge. Dominic Howard, Muse’s drummer, was the most talkative, commenting “It looks like you're having fun, I know we are!”

Playing all of the old favourites, Muse managed to squeeze 22 songs into their two hour set, finishing their main set with an extended version of “Newborn”. However, the best was saved for the encore. “Soldier's Poem” was dedicated to "unsung heroes", and featured a stadium full of people holding phones aloft before a dreamy rendition of “Blackout”, which featured two acrobats suspended by giant white balloons soaring above the crowd for possibly one of the most beautiful moments to be seen so far at Wembley. All attention was off the lads as the two acrobats flipped and twirled with grace and beauty, with the music providing the perfect soundtrack.

“Plug in Baby” was the last all-out energy filled number for many people, complete with tens of huge balloons filled with glitter floating around the stadium. Final encore was saved for the epic trio of “Micro Cuts”, “Stockholm Syndrome” and “Take A Bow”, all of which were, well, amazing, ending in a bout of fire and glitter that would make many lesser artists quiver in their boots.

After such an epic evening it’s easy to see how Muse could sell out Wembley twice. Theatrical, amazing musical talent and all out entertainers. The future of Rock? I think so.