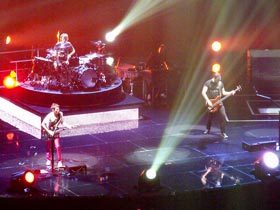 By Stephen Iliffe via the Londonist Flickrpool
The O2 Arena was fully packed - just like Wembley back in 2007 - as Muse played their second night to a sell out crowd. The atmosphere was electrifying and the mass appeal of Muse was evident: teenagers and parents alike were all waiting on the edge of their seats for one of the most popular modern British bands to play.

The crowd heaved forward as Muse kicked off the evening with "Uprising" and the seated crowd were on their feet for the following hour and a half until they finished off with the haunting "Knights of Cydonia". A set list that mainly included songs from their current album with a few mixed in from the past left everyone satisfied. A performance of "Cave" from their first album stood out as a finely crafted piece that shows how talented the three piece were, even when they first started out.

Aloft on podiums each band member was raised up when the moment required the whole audience to see them. The drummer, Dom Howard, was occasionally rotated for the pleasure of the crowd sitting behind the stage and they especially enjoyed it when bassist Chris Wolstenholme joined him up there for a drum and bass jam. Green lights shot across the arena and created a beautiful moving lattice, the whole stage configuration enhancing the showmanship and energy of Matt Bellamy. The Muse front man was milking every second on stage, covering it like a prowling lion.

As with many bands that attain this level of popularity they sometimes get carried away and believe that every note they play while on stage is a masterpiece in the making. The overplaying of distorted riffs trying to link songs can be a pain to listen to but all is forgiven when it slips into the opening of "Plug in Baby".

Muse delivered the goods and showed they have what it takes to be the biggest live band in UK rock for the foreseeable future.