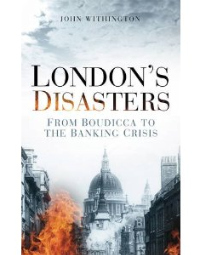 London has a fickle memory for disaster. Could you name the location of London's most fatal fire since the Second World War? Turns out it was just metres from Tottenham Court Road Tube, and as recently as 1980. An horrific act of arson led to the deaths of 37 club-goers in Denmark Place, six more fatalities than the King's Cross Tube fire. Yet the tragedy is all but forgotten, with barely a mention on the internet, perhaps because most of the victims were illegal immigrants.

London Disasters, by John Withington, is filled with similar examples of forgotten horrors. The 40 souls who perished in Regent's Park while ice skating; the stampede in Princelet Street that killed 16. Who knew that eight people were crushed to death at Hampstead Heath station in 1892? Time and again we're confronted with relatively recent events that seem to be disappearing from collective memory - the six killed by an IRA bomb at Harrods in 1983, or the 11 who died in a cinema fire on St John Street in 1994, for example. Might even the atrocities of 7 July 2005 fade into obscurity with the passage of time? The 1952 Harrow train crash claimed more than twice as many lives but (we suspect) will be unknown to many readers.

Bearing such thoughts in mind, Withington's book makes for an enormously compelling read. Avoiding sensationalism, the author relates a long and varied roll-call of calamities - from the scouring of London by Boudicca to the recent financial crisis. The book casually throws up monumental asides. When relating the Zeppelin raids of the First World War, for example, we are lightly reminded that this was the first attack on London by a foreign power for 850 years. Treatment of familiar events, such as the Great Fire and the Blitz, is also well judged.

There are a few omissions - no mention of the 1903 Colney Hatch asylum fire, which claimed more lives than any other London blaze since Medieval times, or the tragi-comic drowning of eight people when a vat of beer gave way in St Giles. But there's already more disaster here than even the most conniving Bond villain could handle. A surprising and compelling compilation that every London history buff should own.

London Disasters By John Withington is available now from The History Press.

See also: Our map of London disasters, now updated thanks to information from this book.