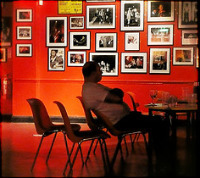 One of London's most famous music venues could close amid financial problems. The 100 Club, at 100 Oxford Street, claims to be the capital's oldest live music venue, starting life as a jazz club in 1942 and playing host to a who's who of rock and roll greats ever since.

Yesterday, the Evening Standard reported that the club will close at Christmas unless a buyer or major sponsor can be found. A statement on the basement club's website today confirmed the story, citing 45% rent increases for the financial trouble. "The bottom line is that the club has a liability to it's landlords and HMRC that suck 80% of it's income out of the business. How can that possibly be right?," they ask.

We'd encourage anyone who has affection for the place to 'like' the club's Facebook page, as a show of solidarity.

Image by Buckaroo Kid in the Londonist Flickr pool.