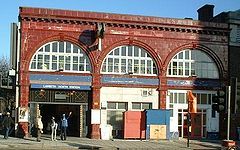 After Monopoly maker Hasbro announced last week that the location of the "Go" square was beside the London Eye — a claim duly rubbished by Diamond Geezer — Ordnance Survey, who compiled the data for Hasbro, have clarified their methodology.

In a blog post, OS said that, after plotting all the Monopoly board positions on one of their maps, they were able to place the actual location for "Go" as right outside Lambeth North Tube station.

Now, leaving aside for a moment the fact that they've made some basic errors in identifying all of the Monopoly squares; we're more interested in the solipsistic re-appearance of the often overlooked Lambeth North as a major location in London. At the beginning of this year, we used a highly orthodox scientific experiment to divine the real centre of London. The result? Lambeth North. We even produced a brief guide to the hitherto ignored Bakerloo line station and its environs, highlighting the exciting sights a potential tourist would enjoy (Kevin Spacey's house, the Necropolis railway, etc.). The addition of the "Go" square only adds to its credentials.

Except, of course, for those aforementioned basic errors. Seems that the plotters have mis-identified Vine Street and Marlborough Street on their map, throwing the whole enterprise into confusion. That new, "extreme" budget hotel opposite the Tube station is unlikely to be overrun by tourists just yet.