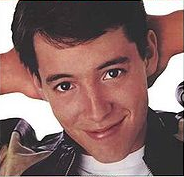 Ferris Bueller
Though it may conjure up images of Buster Keaton films and amusing sequences of spiffily-dressed fin de siècle types rushing around at double speed, Silent Cinema is nothing of the sort: it's a "beautifully simple" concept in which viewers don headphones whilst watching a movie on the big screen, to experience "the perfect private-public cinema experience". Like silent disco then, but with fewer pills, thrills or bellyaches.

This September, Silent Cinema is coming to the Deptford Project, a converted train carriage cafe / bar that also happens to serve damn fine coffee. The Project's coterie of on-site artists are helping to create all the necessary cinema paraphernalia, including the seating, which is made from wooden palettes (a popular choice for pop-up projects this year).

The event is grouped over three themed weekends as follows:

Tickets cost £10 per film, and are available now.