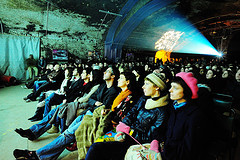 Photo / Joe Lee
While producers rush to embrace hokey 3D films with their temporarily-inflated increase in profitability, underground cinema is enjoying a renaissance in the digital age, with less cumbersome projection technology meaning that films can be exhibited relatively cheaply in some unusual locations (Secret Cinema being but one example). In that spirit, a pop-up "microplex" will open beneath the Westway on Portobello Road this Friday.

Portobello Pop-Up Cinema is a not-for-profit venue that will be showing an eclectic range of diverse films throughout the summer. The current programme includes recent 60s revival Bronco Bullfrog, an evening of travelogues courtesy of the nearby Travel Bookshop, a series of mid-length films programmed by Cinephilia West, and a "Wild West Eleven" season of films shot in the eponymous postcode, including Performance and Withnail & I.

The organisers are also soliciting ideas for future screenings; given the location beneath the Westway, our suggestion would be Crash (the film of JG Ballard's novel, not the back-slapping, schmaltzy, "gee racism sure is bad" Oscar-winner of the same name).