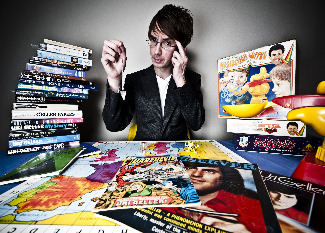 We liked Nathan Penlington's show, Uri & Me, so much at the London Word Festival we went back to see it here in Camden. This is a show that does stand up to repeat viewings - Penlington's deadpan deconstruction of Uri Geller's mystical abilities ('abilities'?) has to tread a fine line to avoid Geller's lawyers, but leaves you in no doubt that there is nothing otherworldly about what the spoonbender does, despite claims about the alien source of his powers.

Penlington does this by recreating Geller's psychic experiments - thought transference, detecting auras while blindfolded on a bicycle, dowsing - while making it perfectly clear it's all tosh. The more skeptical among you may think the audience is stuffed with stooges, but in a space as small as the Etcetera Theatre such a move would be commercial suicide. It's a bit like watching Derren Brown in a cupboard. With sarcasm. And psychically charged orange dots. To be clear: this is a good thing.

Nathan Penlington, Uri & Me, is on at the Etcetera Theatre, above the Oxford Arms 265 Camden High Street, 13th and 14th August 9pm, 16th August 10.30pm. The Camden Fringe runs until 29th August, all tickets £7.50. See the rest of our Camden Fringe coverage.