Back In Black: Bank Profits Announced

By BethPH Last edited 144 months ago
BethPH Back In Black: Bank Profits Announced 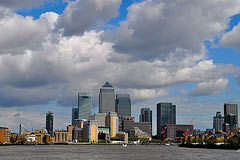 Docklands by Vulture Labs
Breath was bated in the banking world this morning as news of results from Royal Bank of Scotland was released. RBS hit the skids along with counterparts Lloyds and HBOS during the banking crisis and controversially received a government bail-out to the tune of £37bn, which is an awful lot of champers and caviar whichever way you look at it.

RBS and Lloyds have both announced a return to profit, but does this mean we can pop down to the City with our hand outstretched in the hope of getting some of that money back? Sadly no. At least not unless you or your pension company own shares in the banks.

London has long had a love/hate relationship with the financial industry - Boris Johnson vacillated between both when he urged bank bosses to cut bonuses at the same time as issuing dire warnings that extra taxes could cause bankers to desert the city for more laissez faire shores. Doubtless we've all stood at bars in Canary Wharf silently mouthing the words 'How much?!' when presented with the bill for a double G&T, secretly convinced that it's all the fault of the surrounding suited types. The London property market felt the pinch of public scrutiny on banks too - uncertain job security and reduced bonuses meant that bankers hung onto their cash instead of splashing out on vulgar houses and bar bills.

Still, some of that newly-minted profit is finding outlets. UBS are planning a massive new building in Broadgate to replace their massive old building and Barclays dipped its hand in its pocket to sponsor Boris's Cycle Hire scheme (though the latter piece of largesse arguably benefits Barclays more) and Lloyds TSB is a sponsor of the 2012 Olympics. Fortunately, London isn't turning into the financial ghost town that the mayor predicted. Mine's a champagne cocktail, RBS.