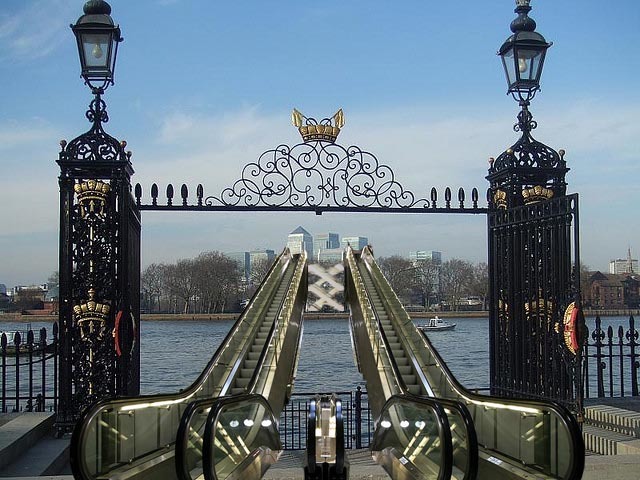 In his bid to find ever-more insane methods of spanning the Thames (a living bridge, a floating airport, cable cars) Boris Johnson has finally settled on this novel design. The Great Greenwich Escalators will rise from the grounds of the Royal Naval College, stretch out over the river and descend into Island Gardens on the Isle of Dogs. The usual London rules of 'standing on the right' will be relaxed to allow northbound passengers the best views of central London. Justifying the enormous expense and environmental impact, Mayor Boris Johnson claimed: "This triumphant locomotive stairway will not only leave a stunning legacy for the people of South-East London, but will also provide an efficient linkage for Olympics spectators wishing to move between the equestrian events in Greenwich Park and the 4 X 400 metres goat racing at Mudchute Farm." He also thanked Londonist reader Adrienne Cooper, for initially proposing the idea.

View the Touch Up London archives, where we provide over 100 visions for how London should be. And submit your own works of photoshoppery to tips@londonist.com