Boris Island: Even The Airlines Don't Want It 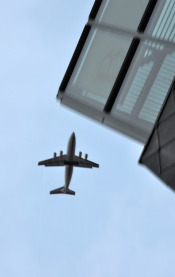 Image by purvesjk from the Londonist Flickr pool
Boris can be a divisive figure at times, but his plans for a Thames Estuary airport have managed to bring together pretty much everyone (politicians of every hue in Kent, the RSPB, 'call me Dave') in opposition to him. Now the Board of Airline Representatives UK - which covers 80 of the 90 airlines using Heathrow - have come out against the plans.

They say planes would still have to fly over London and if Boris Island were to ever open its doors, a knock-on effect would be a necessary redesign of continental airspace, which we can't imagine anyone welcoming with open airs. BA head Willie Walsh also points out that moving London's main airport across town would create a "vast wasteland west of London". It's all sounding less and less feasible (like building a floating airport in the aftershock of one of the world's greatest economic crises was ever going to be a breeze).

But Boris is carrying on with his plans and reports almost as if he, according to rumour, thinks he has a 'divine right to rule'. He's spreading the burden around though: answering a question from Caroline Pidgeon, Boris revealed he's letting poor old Kit Malthouse meet angry Kent politicians tomorrow. How nice of him.