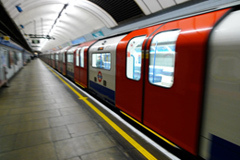 Some of the new trains on the Victoria line, which are being introduced this year, have been affected by technical difficulties.

Only around six of the new trains are being run at peak times, but two of them were involved in significant breakdowns recently: one last week at Pimlico (which saw ambulances arrive to treat heat-exhausted passengers) and another on Monday at Oxford Circus. TfL says that the faults are down to software problems and over-sensitive sensors which halt the train if people lean against the door, something that's difficult to avoid doing in a crammed rush-hour carraige.

Some passengers are calling for the return of the old trains, which date from 1967; the Standard conjured up a ludicrous headline the other day which claimed the new trains were "23 times less reliable". Well, the old ones had over four decades to prove their worth; they also had the useful advantage of being the first trains on the service, and didn't have to be introduced onto an already over-capacity line.

Engineers are working to fix the problems, but rather ominously, a TfL press release says that things will be fine once the £900 million upgrade is completed... in 2012.