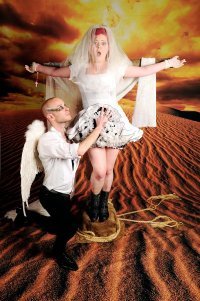 With London Pride 2010 coming to a climax with the parade on Saturday, we spoke to top drag king Ophelia Bitz. The voluptuous comic songstress performs as her alter ego Mavarotti and was the winner of this year's national drag king contest, King Of The Castle. Earlier this year, she got our vote for her performance in Time Out's Alternative Eurovision. Take it away, Ophelia...

What are you looking forward to at London Pride 2010?

I always have fun on the march and this year will be going dressed as the Pope to hand out condoms and I am particularly looking forward to seeing Sarah-Louise Young (and her many alter egos) at the RVT. Her voice gives me chills and the daftness and campery that live in her brain make me cackle every time. Nice wigs too.

How does it compare to Prides you’ve been to in other cities?

I've never been to Pride in any other city. Bad queer! Bad! I was shocked while I was on tour in Lithuania to discover that the mayor of the capital, Vilnius, had actually banned Pride events. Not cool, Lithuania, not cool at all. (NB The ban has recently been overturned.)

My favourite Pride story happened to my dear friend Ruby Blues a few years back. Trotting merrily along the road, trying to catch up with the parade, she spied some big beardy blokes dressed as nuns.

Shouting at the top of her lungs "Darlings! Where's the motherfucking parade?" and running full pelt at them in a shower of glitter, she realised a little too late that she was in fact addressing bona fide nuns. I believe they did point her in the right direction.

Ophelia will be appearing on July 7 as part of Against Nature at Horse Hospital in Stables Market.