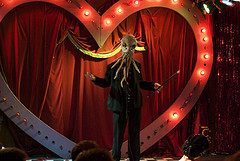 Eurovision has been described as musical Marmite or a kitsch collision of disco, nationalism, outre fashion and downright weirdness. Those who venerate these very qualities congregated last night at the ad hoc Udderbelly venue on the South Bank to celebrate Time Out’s Alternative Eurovision, a collage of cabaret acts compered by Petra Massey and Toby Par of physical theatre group Spymonkey.

Each act adopted a different country: from Bethlehem, we had a Cliff Richard medley; Holland’s Des O’Connor gave us an electro-overload in a sparkly suit and the Maltese representatives, Ginger and Black, provided a Moldy Peaches-like paean to stalkers everywhere. The dancers accompanying the UK act (Jonny Woo) provided an array of bare breasts (male, female and comedy) while Iceland’s Sarah Louise Young sang something which could have come straight from the Avenue Q repertoire such was the cynicism, the swearing and the gleeful nihilism of “I Don’t Care”.

The evening’s acts were broken up by an homage to Terry Wogan and a video montage of Eurovision acts past, reminding us of the event's rich vein of killer choruses, cute kids and crazy costumes.

We handed out the douze points of the night to:

Best costume: Tanzania’s Bourgeois & Maurice. Voted best act on the night by the audience, their rainbow feather creation worn while singing the Emin/Eminem-inspired “I Will Out-Outfit You” was a winner with the crowd.

Best singalong: Switzerland’s HP Lovebox. His head completely covered by a squid mask, he led the audience in a joyful rendition of Seasons In The Sun.

Best performance: The Vatican City’s Ophelia Bitz. Appearing initially in a white surplice and tall mitre to belt out “Let Love Shine A Light”, her dancers soon helped her strip down to something more comfortable. Towards the end, two hunky male dancers dressed as angels joined her to throw confetti into the crowd. She was one of the few acts to make an effort to relate her act to the country she was representing and she just got better and better as the song went along.

Not one act failed to entertain the packed Udderbelly tent. We sang, we swayed, we gawped, we laughed and we loved every minute. Saturday can't come fast enough and nor can the return of Alternative Eurovision.

By Franco Milazzo. Image of HP Lovebox from a previous performance by taleof2cities, used under Creative Commons licence.