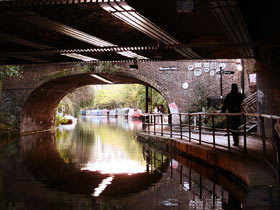 Regents Canal by Simon Crubellier
Nicholas Tomalin was a funky young journalist when he wrote this chapter for the London Dossier. In normal circumstances, it’s fair to say Nick would by now be Sir Nick and revered as an elder statesman of letters. Already his idiosyncratic style had caught the eye of no less a figure than Tom Wolfe, who included one of Nick’s articles in his eponymously titled collection of New Journalism. Eponymously titled and posthumously published, because The New Journalism came out a few months after Nick Tomalin was shot and killed while covering the Yom Kippur War for The Sunday Times in 1973.

Of course, one shouldn’t speak ill of the dead but, well, just this once: Nick sometimes comes across as being a bit snooty.

He begins his chapter on Home by asserting that your average Londoner is inexorably bound to his place of birth. Aren’t we all, though? No, not like Londoners are. ‘He’s tied to his few square yards of asphalt, linoleum and dusty geraniums in a way no Breton peasant, Highland laird or Kansas sharecropper could comprehend.’ So that’s snooty and presumptuous.

In Nick’s case, his patriotism is to ‘that professional middle-class cake-slice between Haverstock Hill and Finchley Road, bounded on the north by Whitestone Pond and the south by Prince Albert Road. In its centre, the mons veneris of my lust for identification, is Primrose Hill.’

Nick reminisces about Primrose Hill for a while (‘the Young Communist League dances at Hampstead Town Hall, the crenulated towers of the Mekay shirt factory’), then sets off on a discussion about who’s got the biggest claim to Bohemian living, Hampstead or Chelsea.

There must have been some rivalry between the two places back in the 60s, with Hampstead seeing its reputation as the home of progressive thinking and free love being slowly usurped by the swingin’ upstart to its southwest. Nick can see similarities between the two areas, however, and these make fascinating reading from today’s perspective.

‘Both have neighbourhoods of stuffy ritzyness (Hampstead has St John’s Wood, Chelsea has Kensington); both have lower-middle class areas (Camden Town in Hampstead, Pimlico in Chelsea); and both have, at their outer edge, semi -suburbs with a total lack of distinction (Hendon and, er, Putney ).

Was Nick perchance a bit of a postcode snob? Had they been invented back then, most definitely.

‘Many of my best friends are West Londoners but I cannot overcome a conviction that the district is simultaneously corrupt and dingy.’ It is nothing but ‘brothels for American airforce officers, residential hotels for dying ladies, love-nests for squalid industrialists and communal flats for unattractive secretaries.’

Blimey. This doesn’t augur well for his thoughts on saff of the river.

‘South London has nothing to do with London as a capitalit is more like a provincial city such as Nottingham. Instead of the social mix of the capital, it has besieged pockets of embattled gentry at Blackheath, Dulwich and Wimbledon.’

Who lives in the rest of South London? Nick knows. ‘Newspaper sub-editors gather in Petts Wood, insurance clerks in Lewisham and impoverished bookish intellectuals can be found around Denmark Hill.’ Can they now.

He damns with faint praise - ‘South London has a relaxing innocence’ - then twists the knife: ‘It has virtually none of the buildings, institutions, tube trains, aristocracy or criminals that mark a capital’. He’s got a point about the tube trains, of course.

He has a theory that wealth tends to follow the setting sun and as evidence asks us to contrast places at opposite ends of London’s East/West compass: Bishopsgate with Kensington Church Street, Bethnal Green with Kew and - ‘in the Home Counties’ - Brentwood with Kingston.

He may have a point there, too, but for the wrong reason. It’s not wealth that follows the setting sun, it’s wealth that can afford to buy property upwind of industry and the poor.

So how best to see all these places that Londoners call home? Uniquely for the London Dossier, Tomalin suggests a canal trip. His evocative description of the route taken by The Regent’s Canal from just south of Uxbridge to Limehouse makes us want to take the trip right now.

‘At Brentford you can enjoy the unique pleasure of a three-layer sandwich bridge: road above canal above rail.’

‘For a considerable stretch you float 200 feet above Thames level, peering down at the faraway streets of Chelsea.’ This we must see. When’s Google going to bring out Canalview?

At Kings Cross ‘strange yellow fires burn day and night on the cinder towpath disposing of shavings and glue from furniture factories.’ Ah, our glorious industrial past.

Then there’s the Islington Tunnel: ‘three quarters of a mile long, fifty yards deep, pitch black, beautifully proportioned and more dramatic than any blue grotto in any Capri.’

Back on dry land, Nick recommends secret gardens (the Astronomer Royal’s, the one in Regent’s Park and - not really a garden - Postman’s Park in the City), then dreams up more creative ways to explore London. Corner collecting, for example: Staple’s Corner, Chepstow Corner, Hyde Park Corner, Apex Corner, Gardner’s Corner. ‘Within a week,’ Nick writes, ‘it should be possible to visit every one of interest.’ That’s next half-term’s holiday sorted! Anything else?

‘You could compare every swimming pool in central London.’ What, every single one?

‘See if you can run up every down escalator on the Northern Line, or try to use every luxury hotel lavatory in one morning.’ Funs!

Or you could visit each of the Royal Parks after dark. ‘At Hyde Park they always leave one gate unlocked each night in a secret sequence so there is some exit for lovers.’

Nick suggests various pubs for profession-spotting, some of which remain fairly accurate (the Coach and Horses for satirists), while others are now little more than a folk memory (El Vinos for journalists).

A real discovery for Nick was a proper Chinese Chinese restaurant. It was located in Denmark Street and was called The Universal. The family behind The Universal could do with a dossier to themselves, but Nick wouldn’t have known much about them back then.

To him, it was the fact that the fairly indifferent Chinese restaurant on the ground floor was used as a clever cover for a much better restaurant upstairs. It was reached by a concealed staircase and was known only by a select - and almost exclusively Chinese - few.

To them, we suppose, it must have felt as close to home as they could get.

Nest week, Steve Race looks at Jazz. *checks* Yes, we’ve got that the right way round.

Browse past instalments of the London Dossier