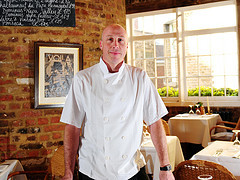 Executive Chef Simon Cottard has been working at Le Café Du Marché for 20 plus years. With three venues under one roof, his top position keeps him active, which seems to be just the recipe for his success. In our interview, Simon explains the career moves that led to him working at Le Café and how he thrives on the restaurant “buzz”.

Your father, Jean Cottard, worked as restaurant manager with the Roux brothers, Pierre Koffman and later with Marco Pierre-White. Did watching him work influence your decision to become a chef? How supportive was he of you wanting to work in the food industry?

Watching my father at work with Pierre Koffman at the Waterside Inn in the late 70s and seeing the excitement of kitchen life inspired me greatly. I knew I wanted to be a chef from a young age due to this. My father was very supportive of me working in a kitchen and helped to organise my apprenticeship with the Roux Brothers.

You've had a stint in the late 80s working as a private chef for the chairman of Commerzbank and later the chairman of British and Commonwealth Holdings. How different was that to your work in restaurants? What brought you back to the restaurant biz?

Working in the private sector is very different. You don't have the same buzz you get from the restaurant service. You also have to work on your own a lot; so you have to be quite self motivated. I went back to restaurants because I missed the buzz and the team work that comes from it.

How long have you been with Le Café Du Marché? How does it compare to other restaurants where you've worked?

I have been at Le Café Du Marché for 21 years! We have three venues in one location with a monthly seasonal menu and daily changing specials, which gives me plenty to do and avoids the pitfalls of work becoming stale and repetitive.

The starter course of pan fried foie gras with poached egg and pommes paille pleased us immensely during our recent visit to Le Café. However, foie gras is especially controversial, with many people finding the force feeding of ducks and geese to fatten their livers to be too cruel to be condoned. What's your take on this dish which seems to as much adored by some as it is maligned by others?

I do agree that foie gras is very controversial at the moment. There is a large demand for this especially in a French restaurant. So we make sure we buy from a reputable supplier.

Where do you like to go when dining out in London? Where do you shop for your home kitchen?

I like to try lots of different restaurants in London and like to use local suppliers (the resident butcher for example) at home. My head chef Phil Hayes also grows a lot of vegetables and fruit which I like to use when I can.

What advice would you give to Londoners interested in cooking French cuisine at home?

My advice to Londoners is to buy seasonal, good quality produce and keep it simple!