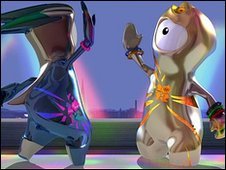 Blithely tossing away the proud history of anthropomorphic mascots, the 2012 Olympic organisers today unveiled the two animated beasties that will embody the spirit of the Games, before being callously forgotten the moment the closing ceremony wraps.

The bizarre animations are called Mandeville and Wenlock, the latter named not, sadly, for Old Street boozer The Wenlock Arms, but for the 19th century Olympic precursor in Wenlock, Shropshire, while his running mate is named after Stoke Mandeville hospital, locus of the Paralympic Games. The pair may look like they were knocked up in a psilocybin-fuelled haze at some Dalston studio, but they were in fact focus-grouped into existence by children and families, and take the form of two morphologically challenged Cyclops with barely a mouth or nose between them; after seeing what happens when you let kids design things for the Olympics, perhaps we shouldn't be surprised.

The characters are daubed with quintessentially Olympian or London motifs: a yellow taxi light, say, or the Olympic rings as friendship bracelets. They seem almost tailor-made for Photoshop tomfoolery, which naturaly has already begun; B3ta launched a challenge within minutes of the launch. Given what happened to the official Olympic logo (poor Lisa Simpson!), it can't come as a surprise to organisers.

Seb Coe, taking a leaf out of Hudsucker Industries' Norville Barnes, explained the concept thus: "You know, for kids!". To whit, childrens' author Michael Morpurgo has been pressed into teasing a convincing "backstory" for the blobs from his cavernous imagination. The narrative, which involves the pair being born as drops of steel in a Bolton factory that's building the stadium (bear with us), then fashioned by a retiring worker into toys for his grandchildren, will develop as the Games approach, with the duo learning different sports as they go.

Will the yoof care? Not if this gallery is anything to go by — some of the kids look terrified by the lifesize creatures. Honestly, whatever was wrong with World Cup Willie?