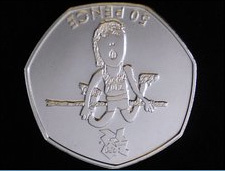 This is what happens when you invite a nine-year old to design the country's coinage. They turn in an obscene drawing.

At face value the 50p piece designed by young Bristolian Florence Jackson, which will go into circulation next year, seems innocent enough: an inexpertly yet eagerly drawn cartoon of an athlete performing the Fosbury flop, a manoeuvre commonly seen in the high jump, with the edgy 2012 Olympics logo present and correct.

Yet rotate the coin 180 degrees and a more puerile interpretation comes to light: as shown in the illustration, our limber-legged athlete now appears to be defecating that very same Olympic logo as s/he leaps gaily over the crossbar.

We're sorry to Ms. Jackson for implying any malpractice on her part, and surely none was intended, but if you don't think that this coin will become a collector's item amongst schoolboys across the country from next year, replacing the time-worn calculator displaying the numbers 58008 as an object of playtime hilarity, then you don't know kids very well.