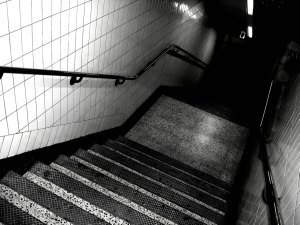 Image by Stephen Illiff from the Londonist Flickr pool
It hasn't been a good day for accessibility: we reported earlier in the year that TfL's abandoned step-free access schemes had cost £20m, but the Standard has information indicating the true cost is closer to £64m.

£39m went on Shepherds Bush alone, doing preparatory work, designing and building lift shafts before it became clear the project would be too difficult and was jacked in last October. Work at Amersham, Greenford, Ladbroke Grove, Newbury Park, Osterley and West Kensington had to be stopped when TfL realised they didn't have the cash to finish the projects. Is this bad planning by TfL, or are they the victims of budget cuts?

Meanwhile, the new sixth form block at Hay Lane School in Brent, which caters for pupils with special needs, was built with ramps too steep for wheelchairs. Just one pupil is currently being taught in the building. We can understand massive station projects running into trouble (though perhaps not the amount of cash spunked into nothingness), you'd have thought it wouldn't be too tricky to sort out a ramp.