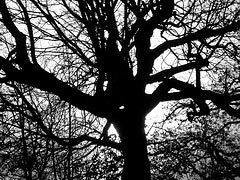 By bltphoto via the Londonist Flickrpool
We finished up last week's Fortean London in a heap at the bottom of a hill in Greenwich Park. Let's stay there for this month. Elliot O'Donnell was a London-based Irish writer and ghost hunter who wrote more than 50 books between 1904 and 1958. Reality and prose blur with O'Donnell, supposedly true accounts come across as ambient horror stories with ghosts, monsters and mild peril but no plot or resolution.

One sunny afternoon, 24 July 1898, O'Donnell was taking a stroll through Greenwich Park, enjoying the balmy afternoon. He found himself in a narrow avenue of elm trees and took a seat against a large elm to admire the "undulating banks of yellow-green turf, a sea of smoking chimneys, of slender, lofty masts, and the glistening, winding Thames."

But before he could be distracted by a young lady promenading with a hint of ankle showing from under her petticoats, or a girl riding a particularly unruly boneshaker, O'Donnell was brought from his revelry by a cold breeze. He noticed the state of the tree he was resting against: it was disfigured by "unsightly notches and protuberant gnarls" and suffering some "malignant parasitical disease".

Then something dark descended from the diseased tree and landed with a "plump" sound beside him. He was shocked to see "a figure half human and half animal - stunted, bloated, pulpy and yellow. Crawling sideways like a crab, it made for a bush opposite and disappeared."

O'Donnell fled, avoided the park until autumn and gave the sickly tree "a wide berth";. Returning to the encounter years later, writing it up from his notebook for Casebook of Ghosts volume 2, his ghost-hunter's nerve returned and he dismissed the poisoned sprite as a "common elemental" or "nature" spirit but remarked that no "occult manifestation has ever filled me with such unutterable loathing".

A lot of the elm trees in the park have since succumbed to Dutch elm disease and been removed. But with the coming of Olympian hooves in 2012 some locals fear that the remaining trees will succumb, their roots pummelled by the horse trials. What, if O'Donnell is to be believed, may come creeping out of the trees if this is the case?

Do feel free to browse the Fortean London archive.