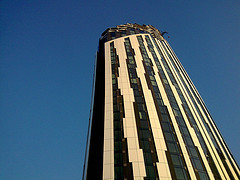 Photo / suburbanslice
The trio of wind turbines at the top of the Strata tower in Elephant & Castle might be turned off at night because of concerns over the noise they generate, reports Building Design magazine.

The turbines, 9m in diameter each, sit on a steel inertia base with a damper at each corner, in order to minimise vibration and noise, and a spokesperson from the turbine manufacturer is certain that residents won't feel anything when the blades are operating. During our tour of the site earlier this month, Brookfield representatives were also confident that the innovative, integrated design of the turbines would allow them to run 24-hours a day.

But project director Ian Bogle has jammed a metaphorical sabot into the mechanism, saying that the turbines will need to be switched off between 11pm and 7am each night, greatly reducing the building's ambition of drawing up to 8% of its energy needs through wind power. Bogle believes that noise from the turbines "will be audible at the upper levels of the building" — coincidentally, where the pricey penthouses are located. We're sure that wasn't mentioned in the glossy brochure.

Strata is due to open later this year, and residents probably won't know the answer until then, but if they wake up in the night to a "thuk-thuk-thuk" sound and the sensation that they're in the opening scene of Apocalypse Now, we'll probably hear all about it.