Bank Of England Museum: A Decoration And A Safeguard

By Lindsey Last edited 153 months ago
Lindsey Bank Of England Museum: A Decoration And A Safeguard 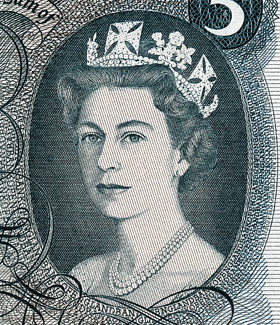 The 2nd portrait, by Reynolds Stone, 1963
A special display opens today at our Museum of the Month marking fifty years since the Queen appeared on a banknote.

Although monarchs' heads have long adorned our coinage, it wasn't until 1960 that a youthful Elizabeth II's portrait was printed on the £1 note. This operated both as jolly royalist decoration, given the Bank of England had just been nationalised, and to foil forgers who weren't as adept at portraiture as the first designer, Robert Austin.

There have been 5 banknote portraits used to date. Austin (1960), Reynolds Stone (1963), two from Harry Ecclestone (1970 & 1971) and the latest by Roger Withington (1990). The new display features a combination of previously unseen sketches and artwork from the Bank's collections, including pencil drawings and rejected designs, printing plates and engraved woodblocks, beautifully detailed examples of lettering by successive designers and early unissued banknotes as well as letters and material relating to the five portraits of The Queen.

Twenty years on, is it high time for a new and gracefully aged representation of her Maj? Or is the Bank holding out for younger, sexier subjects?

"A Decoration and a Safeguard - The Portrait of the Monarch on Bank of England Notes" is at the Bank of England Museum, Bartholomew Lane EC2R until 4 June. Admission: Free of charge to all visitors. Open 10am-5pm, Monday to Friday.