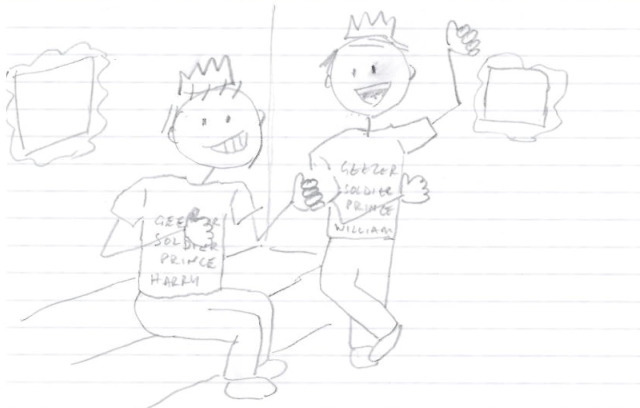 There's a new portrait in the Contemporary Galleries of the National Portrait Gallery. A pair of brothers, casually chatting together, their faces turned to each other and their bodies relaxed, exuding all sorts of 'off duty' vibes in the painting. The brothers depicted are Prince Harry and Prince William in a smart-casual mash-up: they're in their Household Cavalry uniforms with William propping himself up on some sort of costume sabre and both have their white gloves off and are distinctly not standing to attention. Who knows what they're discussing; the intimacy is intriguing and quite different to other royal portraits.

Completed by artist Nicky Phillipps, it's the first portrait to show the brothers alone rather than in a big sitting of other royals and dignitaries. The casualness is captured nicely though the uniforms do lend an air of army recruitment advertising to the painting:

'Look who you could hang out with, chatting easily and chummily just like this portrait! They're normal, like us! But join the Army, and you could become one of them!'

As ever at Londonist, we've felt obliged to provide our own interpretation of the new casual look portrait of the Princes. Which one do you prefer? Which one would they prefer?

Image author's own impression of the portrait