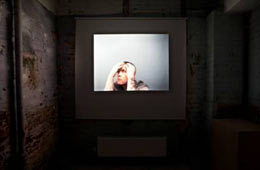 Mark Raidpere's video 'Ten Men' (2003)
Scapegoat Society is a thought-provoking exhibition. Curated by Norn, in collaboration with Mark McGowan, it explores the role of the scapegoat in contemporary society and invites us to question our preconceptions and prejudices and think about what ultimately drives our opinions and actions in everyday life.

Several installations from the nine international artists aim to confront with facts, as opposed to artistic creations that leave room for interpretation. The video installation from Jacek Niegoda shows how behaving against the established norm can provoke anger and aggression. The fact that the video was not acted makes a scene that unexpectedly unfolds during the film particularly disturbing.

Rod Dickinson's installation, a minute reconstruction of the Obedience to Authority Experiment conducted in the early 1960s, is a chilling and powerful reminder of how people can be persuaded to take orders without question, regardless of the task. The Orange Alternative's peaceful protests against the communist regime, such as the 'Revolution of the Dwarves' or 'Freedom for Santa Claus', and the disproportional response they provoked, is documented with original flyers, photographs, and a documentary video.

Mark Raidpere's video showing inmates from an Estonian prison, Rainer Ganahl's 'Homeland Security', and Boris Sineck's interpretation of Chris Burden's 'Shoot' allow the specator to contemplate their existing views on when it is fully justified to denunciate, and if they tend to ignore that there may be a second side to every story. With further installations by Silke Wagner, Arthur Zmijewski and Carolina Caycedo, Scapegoat Society is not an exhibition that you will quickly forget about. It has a haunting effect touching upon important topics that deserve more attention.