Evening Standard No Longer Free In Some Parts 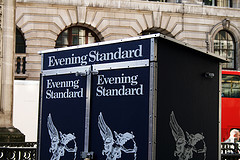 Photo / tezzer57
The Guardian has uncovered evidence that the Evening Standard is once again being sold in some parts of London. Newsagents in north-west London are being permitted to charge a discretionary fee for the paper, which dropped its cover price last October and effectively killed off the competition in the process.

Just what has prompted this about-turn in the paper's strategy? Are Geordie Greig and co worried by the stiff challenge from hard-hitting new rival The London Weekly? Nope, it's all about supply and demand. The new Standard has been criticised for failing to offer the cross-town distribution of old, and according to the president of the National Federation of Retail Newsagents, people in the habit of coughing up a shiny silver 50p for the paper are happy to continue doing so, if it guarantees that a copy will be in stock ready for pickup after a post-prandial stroll.

If this is a win for customers in the capital's nether regions, it's also a boon for newsagents themselves: some have been paying up to 2p per copy to stock it as a loss leader.

The news may pump a little more oxygen into the conspiracy theory that the Standard's bold gamble to go free was a short-term strategy designed to bludgeon its competitors, and that once the battlefield was clear, the price point would swiftly return.