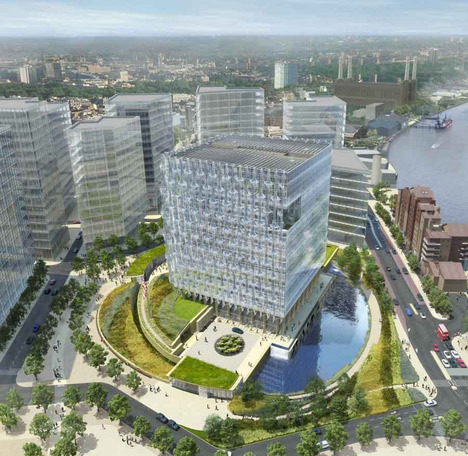 So what do we have here then: a giant-sized Apple Cube? A 21st century Kaaba? Or a Borg ship with a chintzy makeover by Jonathan Ive?It is, of course, none of those, but rather the new US Embassy in Nine Elms, by Philadelphia-based firm KieranTimberlake, which has won the competition to design the $1 billion building.The brief calls for a squat, 12-storey glass cube sitting atop a colonnade, surrounded by parkland and lakes which will be open to the public: an "urban building in an urban park", to quote the architect. Many of America's post-9/11 embassies in hotspots like Iraq and Pakistan have tilted toward a fortress-like bunker aesthetic, a trend criticised by some members of the diplomatic corps. The planned building avoids the foreboding reinforced concrete of recent years, in favour of a fierce-looking facade of blast-resistant glass and a polymer scrim (ETFE, for those who need to know).Different it may look to other contemporary embassy designs, but that doesn't mean it is any more interesting. As an urban park, with a moat and what looks like a drawbridge-style entrance, it seems ready to taunt the local population with medieval mischief: step into the king's realm, and be prepared for a pinch. There are dark rumours that the winner has not enjoyed the support of all vested parties — the Obama administration is believed to favour a rival design, while competition juror Richard Rogers has reportedly called the plan "boring".A fair jab, perhaps, but what was he expecting? Recent geopolitical history has, with justification, driven the US to paranoia over the safety of its federal employees working overseas, and events in London over the past decade, not least the attempted Christmas Day bombing by a young Nigerian apparently radicalised at UCL, have validated those fears. As a piece of architecture, it lacks the joy of the Saarinen building that will be vacated, but as a practical response to an embassy's function, the cube does, sadly, have some merit.Building work is expected to commence in 2013 for completion by 2017.More pictures and a video flythrough at Building Design