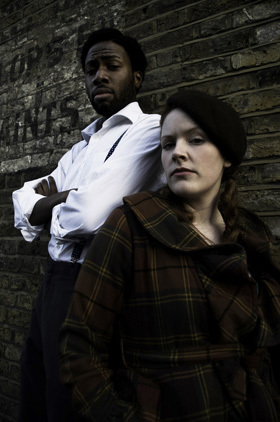 Do you like musical comedy? Snappy jokes? A good old, proper belly-laugh? Comedy duo Ginger and Black would seem to fit the bill nicely. Their current show hit the BAC as part of the N20 Comedy Fesitval this week, and given the string of accolades they brought with them - from relative success in the So You Think You're Funny and Amused Moose awards, to regular stints on Radio 2, Radio 4, BBC3 and E4, and a tour supporting the perpetually sold-out Simon Amstell - you'd be right to expect a lot.

But you'd be disappointed.

From the outset their deadpan nonchalance sits awkwardly with feigned arrogance, as they mercilessly parody the kind of luvvie theatre which they seem to have unfortunately succumbed to themselves. A segment on a fictional childhood wartime experience monopolises the show, with an overly complex series of characters with little to differentiate between them (save for visually, via a little accessorising with the odd hat or pair of braces). Highlights include a skit on forced obesity, invisible birds (of the feathered variety) and juggling hamsters, yet the biggest gag is that someone returns with a dinner fork sticking out of their head, as these build to a crescendo of mediocrity.

All is not quite lost, however - there are moments of humour, hinging on cunningly twisted lyrics as their previous forays into musical theatre make a disjointed reprise at the end of the set. Although criticised in the past for a lack of audience interaction, their novel approach to engagement is genuinely light hearted and inventive. More of this would be great to see in the future.

Apparently The Scotsman once said that "This young, wry comedy duo is on the road to somewhere". Unfortunately we'd hazard that it was Chris Rea's M4.

There's plenty of absolutely great stuff on at the N20 Festival - Londonist favourites Colin Hoult, Simon Munnery and Jonny Sweet all take to the stage this week - but unfortunately this isn't in that particular sector of the entertainment Venn diagram.