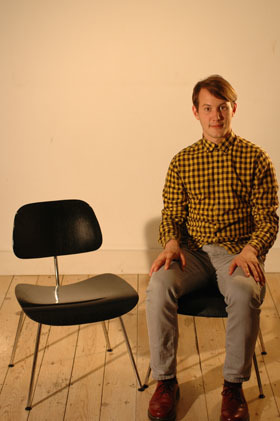 It must be comedy time again, as Jonny Sweet brings his award winning show All About Arthur to the Soho Theatre this month. Running purely on a heady mix of Red Bull and Powerpoint, Jonny weaves a multimedia tale of one brother's dotage which leaps hurdles of mediocrity and, at times, outright failure in his adoration of his elder sibling's exploits in a profession you may never have previously considered. In a story stretching from his early school days right up until his death - that's not giving too much away, this is a wake you're attending - it's these failures outlined as slurs upon Arthur's good character which provide some of the greatest laughs of the set, and it's good to see that graph based humour is the order of the day once again.

The disarmingly bumbling and overtly charming twenty-practically-nothing year old even manages to disguise the fact that he's a downright liar when he greets you at the door, saying "don't worry my love, I'm not the type to pick on people"; though wit, ingenuity and not-so-gentle coercion, by the end of the show he's won over even the most hard nosed and cynical of the audience members to act as furniture, backing dancers and even a chandelier for him.

He may otherwise dress like a politician, and aside from his Edinburgh Newcomer award win, you might recognise him as David Cameron from More4's When Boris Met Dave (although it would take a great deal more fauxtoshopping for you to be genuinely mistaken), but this is one battle for hearts and minds that Sweet has clearly won.

All About Arthur runs until 20th February - tickets £12, but selling out fast.