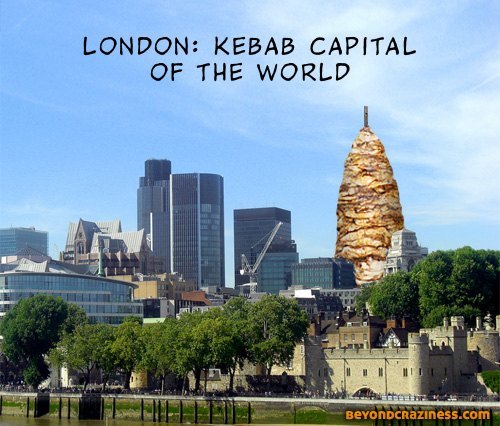 The Gherkin has long been a favourite plaything for photoshoppers. In previous instalments of Touch Up London, it's been mechanised, launched into space, sliced into edible portions and donated to the Royal Guards as headgear. This latest effort by Beyondcraziness (Flickr) shows the iconic skyscraper transformed into a multi-ton edifice of dead animal. It's never wise to think too much about the provenance of kebab meat, especially when the neighbouring street is called Houndsditch.

We're one entry away from reaching the big 100 with Touch Up London. If you want the untold fame and glory of batting the century, send your mocked-up images of mirror universe London to londonist - at - gmail.com. And check out some of the best from the series here.