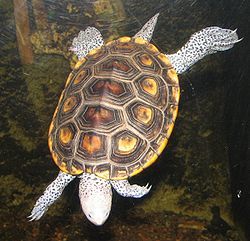 The waterways of north London are yet again being invaded by a terrifying foreign species that is laying waste to our humble home-grown creatures. Yes, the tyrannical terrapin, introduced to these shores during the mercifully brief Teenage Mutant Ninja Turtles fad in the early 1990s, is once again proving that it has thoroughly outlasted the attention span of an ADHD-ridden pre-teen.

We've previously found the terrapins bossing a pond in Holland Park, devouring the ducklings in Mill Hill, and being mistaken for a crocodile in the River Lea. Those who believe the problem had been solved are mistaken: over recent years a new group has settled its shells in Ciissold Park, Stoke Newt (surely "Newington"? Ed.). Last week 51 terrapins, from five different species were removed from the pond by expert trappers, so parents can for now trundle their young ones to the park without the fear that he or she will be traumatised by the sight of a turtle gobbling up the last chunks of lil' fluffy ducky.

But what to do with these illegal immigrants in the long run? Terrapins can live up to thirty years and have a tendency to grow from tiny, wickle, innit-cute babies the size of a 50p coin, into ravenous adults the size of a dinner plate, meaning that as a pet they're out of step with our accelerated, faddish society. Now, if only they could be made into a tasty dish...