A Tube Map Of The Galaxy 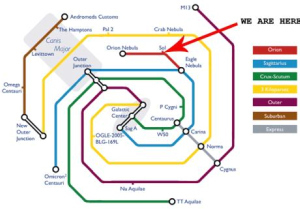 Design classic that it is, our beloved Tube map has been twisted and distorted into all kinds of ulterior uses over the decades. We're no strangers to such manipulations ourselves. But how's this for the ultimate in schematic ambition?

Samuel Arbesman, a computational sociology fellow at Harvard University and a man who sits on ducks, has come to the aid of intragalactic commuters with this handy Tube map of the Milky Way (bigger image). Each stop on the network represents about 1000 light years, allowing hilarious jokes to be constructed about comparative journey times with the Northern Line.

Pretty cool, though, eh? Unfortunately, the Eurostar to the Andromeda Galaxy is not shown, having got stuck in a black hole.