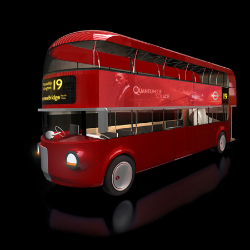 Bus design by Foster & Partners and Aston Martin, one of the joint winners
Transport for London today confirmed that the 21st-century Routemaster will be built by Wrightbus of Northern Ireland, and will be introduced to the streets of London by 2011, with a full complement of the vehicles inheriting most of the bendy bus routes in time for the Olympics.

No new images have been released, though the Guardian got a transport expert to knock together an idea of how it might look. Key among the details released by TfL: it'll have 40% better fuel consumption than current diesel models, and carry at least 87 people. As for the design: it'll have two staircases, one front and one back, which should help with flow of passengers onto and off of the vehicle; two conventional doors, one of them wheelchair-enabled; and a third entrance via an open rear platform, which will "have the facility to be closed off at certain times, such as at night".

Say what? A defining characteristic of the Routemaster is the rear platform, and Boris himself spoke during the election about the tyranny of the bendy bus with its driver-operated doors. What would closing off the door at night, and other times, achieve? One answer is that the rear platform would only be operational when a conductor is present. Yet the issue of conducters remains a mysterious one: Boris promised them during his campaign, then announced that the job could be done by PCSOs, but concerns from police and the estimated additional cost may have stymied that proposal.

Speaking of costs: the actual figure is much debated — TfL said in the summer it would cost £12 million to replace the bendy buses, others have estimated the cost at £60 million — but as the articulated eyesores are set to perish before the new bus even rolls off the production line, does that figure include the hefty tub of cash spent on new buses to temporarily replace the bendies? London Reconnections notes that the first batch of replacement buses, operating on the 38 route, are also built by Wrightbus. Curiously, these buses are operated by Wright Gemini 2 models which also have a capacity of 87. Are we getting a cut-and-shut job with the Gemini 2 and some extra stairs tacked on the back?

One thing the bus sorely needs is a decent name. The project's boring official title is the New Bus for London, or NB4L, though in a city that loves to re-name icons on the fly, that'll never wash. Any suggestions?