No More Bendy Buses On Number 38 From Saturday 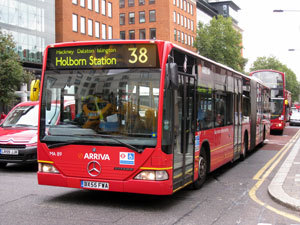 Image of a maligned bendy by steve_w from the Londonist Flickr pool
The un-bendification of London's buses will face its biggest hurdle next week, as the 38 bus reverts to double-decker vehicles, barely four years after first going bendy. The switchover will happen this Saturday, reports London Reconnections, but the Monday morning commuter rush will be the first real test.

The 38 is one of the city's busiest routes, starting (on the northward leg) at Victoria before plying through Piccadilly Circus, Bloomsbury, Islington, Dalston, Hackney, and terminating in Clapton. It was one of the last in the capital to be served by Routemasters, with the last cheered along the way in October 2005. It's unlikely a similar parade will greet the final bendy on Friday night.

While we await developments on the Mayor's Routemaster 2K project, the 38 will be served by a new fleet of buses (Wright Gemini 2 DLs and Enviro400s for the bus-spotters out there). The bald facts don't look good: in order to maintain the same passenger capacity, 72 buses will ply the route, up from the current 44 bendy buses, and a significant increase on the 50 Routemasters previously required. The frequency of the bus will be upped to every 2-3 minutes during peak hours. The change will also see alternate buses terminate in Hackney Central, a move that'll upset Claptonites.

The 38 follows the 507 and the 521 in being stripped of the "hated" (quote: Boris voters) bendy bus. How will the new fleet cope with a busy route which is already thick with traffic, one set to worsen when the trucks carting Crossrail dirt away begin to clog the streets? We'll be riding the 38 come Monday morning to see how the first day goes.