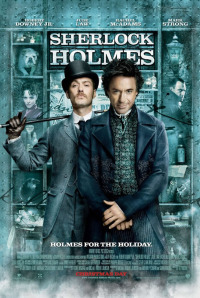 Yesterday, we interviewed Lionel Wigram, one of the main creative forces behind the new Sherlock Holmes flick, about the role London plays in the Holmes stories. Today, we ask the producer and story writer about the inspirations behind the reinvented central character. The dandyish, dishevelled Holmes, played by Robert Downey Jr, is very different to previous portrayals. Yet, as Wigram discusses, every element of the interpretation is drawn from the original Conan Doyle descriptions (with a little help from the Rolling Stones and Toulouse Lautrec).

I was always a big fan of the stories, really, from my childhood. My father first read them to me when I was about nine years old. What I saw in my mind's eye when I read the stories didn't really coincide with anything I'd ever seen in any of the films or on television. Not that I wasn't a fan. I loved the Basil Rathbone ones, and the Jeremy Brett ones more recently. But somehow what I saw in my own mind's eye was different.

On how a new yet old Holmes emerged

I had been an executive at Warner Brothers for many years, and when I decided to start my own company and be a producer the first thing I did was to reread the Sherlock Holmes stories and the novels. And I was very happy to discover that indeed what I had suspected was the case. When I read him, I saw a very different character to the one portrayed more commonly. I think primarily, I saw somebody...a character who was a great deal more modern and more accessible, less of the sort of Edwardian gentleman that had evolved from the Basil Rathbone films, much more of a damaged and vulnerable figure who was brilliant on the one hand, and the best at what he could do and a genius, but also somebody who in between cases was likely to spend two weeks laying on his sofa in a funk...and somebody who probably suffered from some kind of bipolar depression and was possibly autistic as well. So I thought there was a really interesting and modern, really accessible mix of personality there, which I thought was exciting. I'd never seen him presented that way before.

The other thing that occurred to me...of course, one's always looking for something that would be popular and fun, is just how fun a character he was and how much of an action hero he was. Because, again in the stories, Conan Doyle refers to the fact that he's an expert boxer. In fact one character in the Sign of Four mentions that he remembers Sherlock from the bare-knuckle fights in the East End of London and how Holmes could have been a champion if he'd taken it seriously. And there are also references to his expertise with a single stick, which is a sort of short wooden club which people would carry around with them at night in London for self protection, and also he's an expert swordsman. And of course, in terms of the modern audience, he used a martial art called baritsu when he fought Moriarty on the Reichenbach Falls, so that allowed us to use martial arts and make him a martial artist in the film. So here we have a character who has all these modern complications to his character, but also we can portray as an action hero without compromising the integrity of the original stories. As a fan of the master I didn't want to do anything I thought he'd disapprove of in any way.

On the origins of the 'classic' Holmes image

I think that the images that people have of Sherlock Holmes really come from two sources. One is the Sidney Paget drawings which accompanied some of the original stories in Strand Magazine. The other is the Basil Rathbone movies, which were made in the 30s and were really very much patriotic films made during the war, and all about doing the right thing for England. From those two sources really sort of emerged the classic image of Sherlock Holmes with the deerstalker hat and that curving Meerschaum pipe, and of course there's the image of him as the...coming from those 40's films...as the immaculately dressed English gentleman who's very proper and very much as one would imagine a Victorian gentleman to be.

On how the Rolling Stones influenced Holmes

When I read Sherlock Holmes, what I saw in my head was much more what a Victorian artist might have looked like. In fact, in one of the stories, Watson refers to him as Bohemian, so in my mind's eye I sort of imagined a character out of Toulouse Lautrec. I also, for some reason in my head, as a big rock and roll fan, I was reminded of the Rolling Stones in their 'Victorian Period'...from the early 60s when Brian Jones was still around and they'd dress in Victorian outfits. Here's a man who, when he's not on a case and firing on all cylinders, spends his life in a depression and hanging around, and is probably someone who isn't necessarily so immaculate. If he's spent two weeks laying around on his sofa, his hair is probably a mess, he's probably unshaven. I thought, wow, that's a much more real version of Sherlock Holmes. To me at least. So that's what we did. I think it worked very well. The way he looks and the costumes are both authentic to the period, but they also somehow look very cool and modern, and somehow very much in fashion at the moment. In fact, I believe there are some articles in the papers about the new Victorian look in fashion, with the wonderful Victorian waistcoats and jackets and tweed and all that. Part of which I think has arisen because of this interest in Sherlock.

On the lasting appeal of Holmes

It's interesting. The original Holmes stories came out in 1887. That's 122 years ago. That means that probably our great-grandparents read the stories, our grandparents, our parents certainly did, we did and our children have or will. That's a pretty amazing feat of writing and I think the reason for that is that Conan Doyle managed to create a character who was genuinely and authentically, psychologically complex and complicated. And he created a hero who, if you compare him to the characters in Treasure Island, or John Buchan's characters or people like that, those tend to be good old-fashined heroes who are brave and strong and go into battle, but Holmes is a very flawed character. And Watson who, of course, provides our point of view for the stories doesn't mind pointing out his insecurities his inadequacies, the sort of funny quirks that he has, as well as of course how brilliant he is and how brave he is and how clever he is. I think that's what makes him so relateable, still today. He really comes across as a very complicated and interesting character. I think that's what it's all about. If you look at modern television...The Wire...Sopranos...these kind of characters who capture the public imagination, I think very often it's because they're complicated.. It's not black and white. They're not all good or all bad. And I think that's what Holmes is. He's endlessly fascinating. And every time I read the stories I discover more about him and think about him in different ways. And I know Robert Downey felt the same way, and still does, and is constantly finding new details about him. That's why he's so wonderful and we're all such fans. I started as a fan. I think Guy had been a fan as a child. By the end of the movie, all our cast and crew were reading the stories and were sort of obsessed with them. We'd talk about which were our favourite stories.. He's absolutely amazing. Conan Doyle is such a good writer.

Do you have a favourite story?

Probably the Sign of Four - of the longer ones. I've got to say - one of my favourites is the Valley of Fear. That whole section in the middle that's not even about Holmes. The writing is so good. There are other ones. I love the Red-Headed League. And I love the Greek Interpreter as it's got Mycroft in it.

This interview was conducted by Matt Brown on behalf of Soundmap, Ltd. during research for a downloadable audiowalk of Holmes' London. The walk is available from the Guardian's microsite. To find out more about Holmes' London, see our map of locations mentioned in the books. A complete transcript of this interview is attached. Please do not reproduce without permission.