From The Grant Museum: The Mystery Of The Quagga's Leg

By M@ Last edited 134 months ago
M@ From The Grant Museum: The Mystery Of The Quagga's Leg 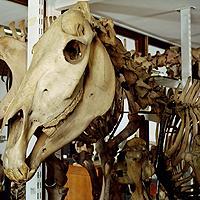 In the third of three posts, we focus on individual exhibits from the weird and wonderful collection of our Museum of the Month - the Grant Museum.

Here we see the skeleton of a female quagga (Equus quagga quagga). This extinct form of zebra lived on the grassy plains of South Africa until the 1880s. Unlike common zebras, only their front third was stripy; the rest of their bodies were brown. Hunting for this unusual pelt was one of the reasons they were driven to extinction, another was competition with livestock for grazing pastures.

The last known quagga died at Amsterdam Zoo on 12th August 1883 - it is one of the few animals for which the exact moment of extinction is known. The Grant Museum houses one of only seven quagga skeletons in existence - it is the rarest skeleton in the world. 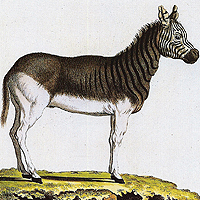 The history of the Grant Museums' quagga is slightly embarrassing. They had two "zebras" listed on the museum's register. There was a rumour that one of them was in fact a quagga. In 1972 the world's quagga expert came to measure up the zebras against known anatomical features. To great fanfare, one of the "zebras" was upgraded to the ranks of world's rarest skeleton. The downside was that the second "zebra" turned out to be a donkey - a significant demotion in zoological terms.

The Grant Museum's quagga only has three legs. The location of the fourth is uncertain. The most likely story is that the leg was on loan to the Hunterian Museum at the Royal College of Surgeons during WW2. This building was bombed during the Blitz, and part of their collection was destroyed, including - it's believed - the quagga's leg.

An alternative theory is also war related - the entire Grant Museum, along with the whole UCL Zoology Department, was evacuated to Bangor in Wales to avoid such damage as the Hunterian suffered. Unfortunately not all the specimens made it back after the war ended, and it is possible the leg was among the missing.

Recent DNA studies on museum skin specimens (quagga skins are more common than skeletons - just over 20 are known) have shown that quaggas were not a distinct species but a sub-species of the plains zebra. The South African Museum in Cape Town is working on a project to selectively breed plains zebras with relatively few stripes on their hind-quarters, until the same colour pattern as the quagga is achieved: essentially they are attempting to breed the quagga back from extinction. Obviously, they wont actually ever manage to recreate the quagga, but they might, after a lot of time and money, end up with a zebra that isn't very stripy, and so looks like a quagga.

The Grant Museum is open every week day between 1pm and 5pm. You can find it on UCL's main campus, with an entrance on Malet Place. Top image (C) UCL Museums & Collections