From The Grant Museum: A Disarticulated Whale

By M@ Last edited 156 months ago
M@ From The Grant Museum: A Disarticulated Whale 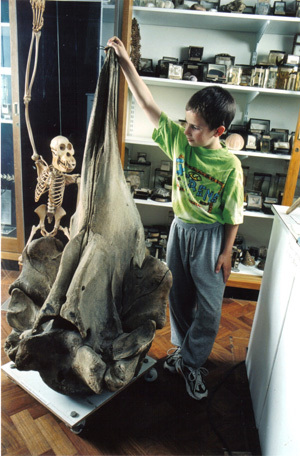 In the second of three posts, we focus on individual exhibits from the weird and wonderful collection of our Museum of the Month - the Grant Museum.

This week's featured exhibit is the disarticulated skeleton of a northern bottle-nosed whale, Hyperoodon ampullatus - the same type which swam into London in January 2006.

Due to the restricted space in the Museum's current location, only the skull and some of the vertebrae are on display, but the rest of the skeleton is in store and available for research use. Next year, UCL Museums plan to get the public to temporarily re-articulate and clean the skeleton, around a multi-disciplinary series of events about all things whaley.

The specimen has one of the best documented histories in the Museum. According to a local newspaper, on 7 November 1860, two men out shooting near Weston-super-Mare heard reports of 'two great fish' sighted nearby in the Bristol Channel, and went in search of the creatures. They tracked down the whales, one of which they eventually killed after firing more than twenty rounds. The 'fish' was identified as a northern bottle-nosed whale of more than 26 feet and five tons. It was exhibited to the public in Bristol, drawing large crowds and raising large sums in admission prices.

Mr Edward Goodringham then bought the carcass for £120, intending to stuff it and tour the country. He wasted his money. The corpse has decomposed and was not salvageable (any natural history curator will tell you that whales and dolphins are among the least pleasant specimens to prepare as they exude a foul smelling oil that can continue to leak out of bones for years). The bones next made their way to William Mable, the founder of the Albert Memorial Hall - Weston-super-Mare's first museum (now the North Somerset Museum). He buried the bones for two years to clean them by decomposition and then his wife washed them one by one in her copper bath. The skeleton was displayed fully articulated in Mable's museum until 1948 when it was brought to the Grant Museum.

The way the specimen was collected and subsequently treated gives us a sharp reminder about how things have changed in the field of museum acquisitions since the Victorian era. While it is true to say that this country wouldn't have the amazing collections it does today without the passionate though environmentally questionable collecting practices of the past, it is very important that we keep and continue to use historic collections - they still provide a huge amount of data for modern science.

Image © UCL, Grant Museum of Zoology and used with permission. With thanks to Jack Ashby.