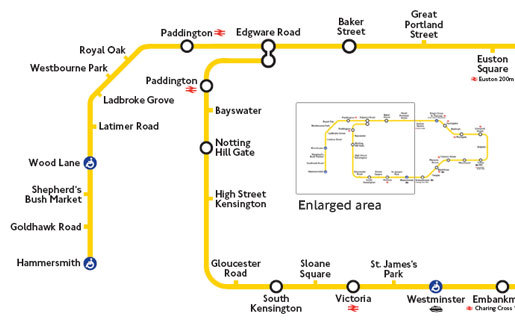 The uncircling of the Circle line will go ahead on December 13th, according to posters and leaflets being distributed on the network, and TfL's own website

The plan, you'll recall, is to have trains start at Hammersmith, nip up through to Edgware Road, then perform a complete loop of the existing Circle line track before terminating at Edgware Road, then unwinding back through the line and ending at Hammersmith. TfL say this will mean increased service between Hammersmith and Royal Oak, and a better service overall for the Circle line, allowing easier recovery of defective trains and no more nerve-shredding 20 minute waits for the next service. Another benefit is that trains from particular destinations will now stop at the same platform at Edgware Road, meaning an end to the current guessing game of trying to work out where to wait.

On the down side, Circle line trains travelling from the main loop up toward Edgware Road will now terminate there: anybody hoping to get from, for example, High Street Kensington to Farringdon will be forced to change. There are also concerns about the ability of Edgware Road to handle its increased responsibility. Earlier in the year Diamond Geezer went along for a trial run of the new system, and reported that staff described it as a "nightmare"; anyone familiar with Edgware Road will know that it's not really built to handle mass inter-platform movement, and the new arrangements will dramatically increase the number of passengers dwelling there.

The new line, as shown in full in this PDF, has lost its former vaguely bottle-shaped layout (appropriate for those pub crawls) and now looks more like a... hmm. A teacup. Or maybe a petrol pump. Definitely not a Circle, though (not that it ever really was of course). The most inaccurately named line on the Tube network surely deserves a better title.