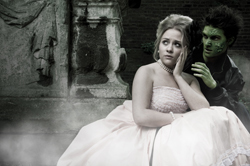 "What is it? What? Is it my hair?"
So what do you get when you marry Grease with the Rocky Horror Picture Show, and add in a little nuclear action? Zombie Prom, the latest production from the Landor Theatre in Clapham.

The story centres around high school sweethearts Toffee and boyfriend Jonny - who’s flouting his heathen side by removing the ‘h’ from his good Christian name - and the combined efforts of Toffee’s parents and Miss Strict the headmistress in splitting them up. Jonny despairs and throws himself into the local power plant and gets flushed out to sea as toxic waste. However as we all know, you can’t kill true love. Not even with radiation, it seems. Toffee’s siren call summons Jonny back from the depths of the ocean to be reunited with her once more. Now all she has to do is thwart the establishment and be allowed to return to school, and he enlists the help of local celebrity reporter, Eddie Flagrante, to help him win back Toffee and be allowed to go to the prom - the classic American teen dream.

Sophie Issacs as Toffee has a powerful voice that could raise the roof off this intimate venue, and she thereby overshadow Jonathan Vickers, playing Jonny. His transformation into a member of the undead is marked by lurid green facepaint and the acquisition of a facial tic, which owes more to the Incredible Hulk than the 50's movie culture that this genre spoofs. Musical numbers ‘Rules, Regulations and Respect’ and ‘Exposé’ proved to be the highlights of the night, and Lucy May Barker and Darren John frequently steal the show in overtly comic roles. Grace Harrington’s impressive choreography is performed with huge energy from the entire cast. Overall, though, it’s the thinness of the writing - despite coming from the writers of The Witches of Eastwick - that lets down the considerable talent.

Bear in mind that the Landor does not have disabled access to the theatre and if you attempt to make it to the (single) female loo during the interval make sure someone else goes to the bar in order to get back upstairs for the bell.

Zombie Prom runs at the Landor Theatre, Clapham until 14 November. Tickets are £15.