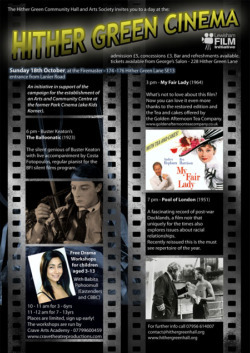 In May we brought you the news that campaigners in south east London were trying to save the art deco former cinema in Hither Green; a developer wants to knock it down and build flats, but locals want to turn it into a badly needed arts and community centre. First blood went to the campaigners when planning permission was refused a couple of months ago, and now they're trying to prove a demand for culture exists in SE13.

What they've come up with is pretty cool. The old Firemaster building on Hither Green Lane is becoming a cinema on Sunday, showing My Fair Lady with free tea and cakes from the Golden Afternoon Tea Company and the Buster Keaton silent film Balloonatic with piano accompaniment from Costa Fotopoulos, who often plays at the BFI. The evening rounds off with Pool of London, a tale of crime set in the post-war Docklands, which was recently included in the London Boxset. There'll even be a bar on site if you get thirsty.

(Littlest Londonists might be more interested in what's happening in the morning. Crave Arts Academy are running free drama workshops for children, so limber up and get down there for 10am if your young 'uns are between 3 and 6 years old, or 11am if they're 7-13.)

Tickets for the cinema are just £5 for the whole day, and available on the door or in advance from George's hairdressers at 228 HIther Green Lane. It's costing the newly formed HIther Green Community Hall and Arts Society two grand to put this on, so if you live nearby it's definitely worth heading down. We'll see you there.