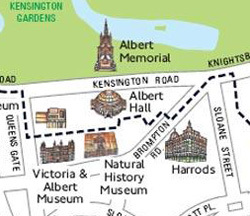 A gold star to the Telegraph for spotting the schoolboy errors in Transport for London's new cycle-hire map. As you can see, the labels for the Natural History Museum and V&A have been transposed, Exhibition Road has vanished and the Royal Albert Hall and Memorial appear to be creeping off towards Knightsbridge on some kind of hyper-incestuous date. The map - aimed at cyclists using the forthcoming bike hire scheme - was quickly withdrawn from the TfL's site after the Telegraph highlighted the errors. The clumsy cartography follows on from the vanishing river hoo-ha of a few weeks ago, when The Mayor reversed TfL's decision to excise the Thames from transport maps.

Still, TfL have a long way to go before they can equal the geographic cluelessness of Waddingtons, whose board game 'Tour of London' contains this baffling render of St James Palace.