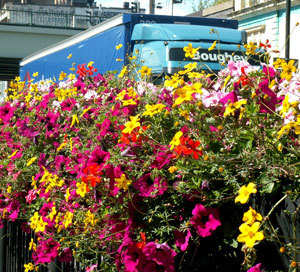 The Campaign for Clean Air in London is claiming there's a cover up going on over a spat between Boris Johnson and the government about the capital's air pollution. There's been a series of meetings between the two, but freedom of information requests to discover what was discussed have been refused.

This (probably, who knows) all stems from legal proceedings begun by the EC after the UK failed to meet air quality standards. Apparently the government was hoping to dodge any penalties by pointing to the Western Extension of the Congestion Charge and bringing vans and minibuses into the Low Emission Zone (otherwise known as Phase 3), but Boris is scrapping them both. This is where things get a bit murky: the government is "thought" to want the Mayor to commit to replacement low emission schemes, but he "may have refused". Which is why people want to see the damn minutes.

So we have two issues here. One is that the air we're all breathing is polluted above and beyond recommended safety limits, perhaps contributing to 5,000 early deaths each year; and another is that nobody will tell us what, if anything, our leaders plan to do about that. Oh, and whether any fines from the EC will be paid for by we, the taxpayer. Three issues. Anyone got any others, before this turns into the Spanish Inquisition sketch? (Wrap the lorries in flowers! Image by Gaz-zee-boh)