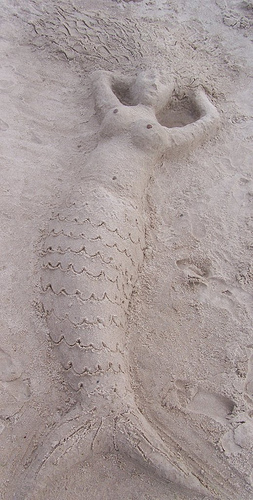 In episode 98 I spoke of the purported 'mermaid' brought to London in 1822 by a Captain Eades. Eades exhibited the fraudulent freak which turned out to be nothing more than a chimera of known animal skin, bone and hair. Strangely, look in any fantasy book and mermaids - long haired females, with breasts on show, with their bottom half that of a fish - sit alongside unicorns as wondrous mythical creatures of beauty. And yet the so-called 'mermaids' which pepper world folklore are nothing short of hideous creations brought from far away lands. These scams have been used often at museums, circuses and street fayres, all as fool to the public who used to pay good money to see such a monstrous sight.

The London 'mermaid' is not the only ghastly creature paraded through the lore of the capital. One of the most recent exhibits emerged in 1961 and belonged to zoologist Sir Alister Hardy and was put on show at the British Museum in London. Strangely, the owner claimed to not know the origins of the form but said he was approached by a stranger one day who believed the monstrosity to be genuine and approximately three-hundred years old!

Hardy investigated the 'mermaid' further and found that upon closer scrutiny the body of the being was nothing more than a network of wire. Mind you, author Jan Bondeson, author of 'The Feejee Mermaid', commented that he'd observed a cleverly constructed 'mermaid' in 1993 at the British Museum stores in North London. He wrote, "This specimen is likely to be one of the most skilfully constructed mermaids extant today..."

Back in the 1850s, author Frank Buckland was said to have observed several strange specimens, one of which was said to have been an evil looking creature, stored in the back parlour of the White Hart, Vine Court, Spitalfields. Another, smaller form was said to have been on sale in an old curiosity shop at Hungerford Market. These extraordinary critters were formed of a fish - usually something large like a carp or a salmon - at the hind, and the upper body belonging to that of a monkey.

Although these leathery individuals fooled the public no longer, their place in folklore is long-standing. In fact, such devilish inventions, although far removed from the 'mermaids' of fantasy, are probably the closest we'll come to finding something akin to those fabled aquatic humanoids.