By NeilA Last edited 167 months ago
NeilA The Saturday Strangeness 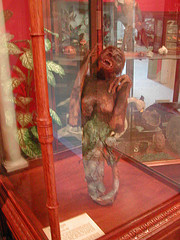 The case of the London mermaid is classic folklore. Here was an alleged creature, brought to the capital by a Captain Eades, who purchased the specimen in 1822 from fisherman in Holland, who claimed they'd obtained it from Japanese anglers. Eades illegally sold his one-eighth ownership of a vessel to fund his purchase. At the time the mermaid certainly looked real, a leathery chimera with a head like a baboon, the lower half of a large fish, the nose, breasts, fingers, nails and eyes of a human, and a body measuring over three feet in length.

Eades decided to take his mermaid on tour after docking at several harbours and making a quick profit from locals eager to observe the monstrosity. From here, the devious captain would take to London and see his creature exhibited at the Turf Coffeehouse in St James Street, where he rented a room from a Mr Watson.

Many naturalists and the like who saw the creature all agreed it was in fact a real mermaid.

A MERMAID!! - A wonder of the world, the admiration of all ages, the theme of the Philosopher, the Historian, the Poetmay be seen at number 59 St James Street, every day, Sundays excepted from ten in the morning until five in the afternoon. Admittance one shilling.

... so read the sign which attracted thousands of curious people.

Despite making a lot of money from the specimen, the bubble would soon burst. A Mr Pickering who owned a majority of the ship that Eades sold was on the rampage, and soon showed the captain up for what he was, a fraud. Meanwhile, a Mr Clift, expert anatomist, was quick to pour cold water on the authenticity of the beast. The mermaid was simply a clever construction of fish, human bone, artificial material, and monkey!

The public had been ripped off. Chaos ensued. Eades attempted to flog a dead horse for the next few months until the coffeehouse shut down in 1823. No-one really knows what happened to the fraudulent creature but London had never seen anything quite like it.