From The Hunterian: The Cockerel's Tooth

By M@ Last edited 155 months ago
M@ From The Hunterian: The Cockerel's Tooth 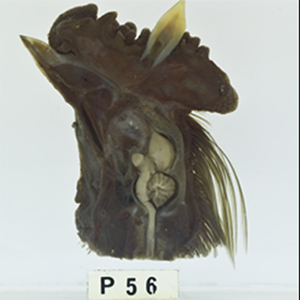 In the first of three posts, we focus on individual exhibits from the weird and wonderful collection of our Museum of the Month - the Hunterian Museum.

Yes, it's a cockerel's head with a human tooth sticking out of the top. Surgeon John Hunter made several bizarre experiments in transplantation during the 18th Century, including the successful grafting of a cock's testicle on to a hen's belly. Here's his account of the tooth experiment from Treatise on the Natural History and Diseases of the Human Teeth, published in 1778

"I took a sound tooth from a person's head; then made a pretty deep wound with a lancet into the thick part of a cock's comb, and pressed the fang of the tooth into this wound, and fastened it with threads passed through other parts of the comb. The cock was killed some months after, and I injected the head with a very minute injection; the comb was taken off and put into a weak acid, and the tooth being softened by this means, I slit the comb and tooth into two halves, in the long direction of the tooth. I found the vessels of the tooth well injected, and also observed that the external surface of the tooth adhered everywhere to the comb by vessels, similar to the union of a tooth with the gum and sockets." Hunter adds "I may here just remark, that this experiment is not generally attended with success. I succeeded but once out of a great number of trials."

Hunter went on to popularise tooth transplants between humans. Down-and-outs would queue up at his surgery to have their relatively healthy front teeth yanked from their gums (without anaesthetic) in exchange for money. The excised teeth would then be implanted into the gums of the gap-toothed rich. The new fangs could remain in place for several years, but never fully adhered and were prone to pass on disease. This grim chapter in the history of dentistry came to a close early in the 19th Century with the advent of realistic false teeth.

The toothy cockerel can be seen (as item RCSHC/P 56) at the Hunterian Museum in the Royal College of Surgeons, Lincoln's Inn Fields.With thanks to Jane Hughes for assistance.