Book Review: The London Of Jack The Ripper

By M@ Last edited 131 months ago
M@ Book Review: The London Of Jack The Ripper 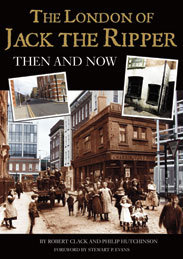 Is there anything new to say about the Ripper murders? A search on Amazon yields over 50 results - from forensic casebooks to fantastical reinterpretations - and that's before you even look at web resources. Mary Kelly's mutilations are as mere paper cuts beside the endless dissections of this particular body of research. But such is the unquenchable interest in the Whitechapel murders that there will always be a market for new Ripperanalia. Robert Clack and Philip Hutchinson's reissued addition to this blood-smeared edifice has more to say than most and, by digging the knife in deep, opens a few veins of information not present in more cosmetic treatments.

Each of the Whitechapel murders is described in detail, starting with the last known movements of the victim and finishing in the grave. Every important location is described, with hundreds of photographs (many of them rarely published) showing how the scenes have changed from the 1880s to the present day. At times, the inclusions are clearly for the hardcore Ripperologist (how many casual readers will want to see pictures of the attending surgeon's home?). But on the whole, the book offers page after page of fascinating comparisons and glimpses into the squalid history of the East End. Commentary goes beyond the 'canonical five' victims, to include a further six unsolved murders in the district that are sometimes attributed to the same killer.

Don't expect conspiracy theories or speculation here, though. From start to finish The London of Jack the Ripper is a resource of fact that delivers detail without ever getting bogged down in it. The inclusion of a few maps might have helped those less familiar with the crime scenes - many of the important locations are in narrow courts or vanished streets. But, then, half the fun is sitting there with Google Street View open, getting a better appreciation for the geography.

If you're looking for a page-turning introduction to the topic, The London of Jack the Ripper ain't it. If you've already read From Hell, done the tour and danced around the factual literature on the Ripper, this book is the perfect volume to take you a couple of steps further into that shadowy alley.

The London of Jack the Ripper Then and Now by Robert Clack and Philip Hutchinson' (updated edition) is out this week from Breedon Books, RRP £14.99 in hardcover.