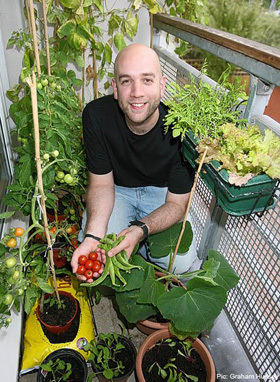 Last we heard, Boris was all up for Londoners sprouting veg in their nooks and crannies to feed the Olympian influx from our own rooftops, windowsills, back yards and balconies. Great, in theory, but left to our own devices we keep buying bags of salad. Then we heard about, Callum Saunders and his fecund micro-balcony exploits in Hackney which have spawned the London Vegetable Garden blog and a whole network of aspirant and established urban gardeners. Could he help the Londonist garden finally flourish? Let's see.

Hi Callum! What got you interested in growing your own?

When my girlfriend and I moved into our current flat 1 year and 4 months ago.  We have a good size balcony that was a sparse, bare piece of concrete!  We put a few pot plants out there, I decided to have a go at growing salad as well and the rest, as they say, is history!

What are the easiest things to get growing on a window sill?

Without doubt, the easiest things to grow on a windowsill, vegetable wise, are salad leaves such as lettuce and rocket. All you need is a well-drained container, such as an old ice-cream tub, some soil and seeds and you’re off. Rocket is very hardy - just keep things watered well, since they can dry out quickly on a sunny windowsill.

Well, my butternut squash plant is threatening to take over the entire balcony, but it’s a long way off big squashes, so we’ll have to wait and see. Although not extraordinary, I’ve managed to grow runner beans in pots on my balcony, which took plenty of watering and care - definitely an extraordinary thing to have a go at on a balcony, but very achievable!  I’ve also been enjoying an abundant crop of tomatoes!

If you live in an apartment without so much as a windowbox, how can you get planting and pottering?

There are many ways. Obviously for the majority of Londoners, allotments are out of the question, since the majority of London councils have ludicrously long waiting lists - 40 years in Islington! Try looking for community schemes such as shared gardens, or schemes to help look after an elderly person’s garden; Wandsworth council recently launched a similar scheme that has been really successful. One of the simplest things to start with however, as suggested, are hardy vegetables and plants that can be grown on a windowsill, such as salad leaves and radishes.

Rooftop vs windowsill - what has the edge?

As with all things, it depends what you’re looking for. Rooftops offer a large space on which to plant things, but the lack of shade means that during oppressive summer months, many delicate plants can’t cope. A windowsill offers you the flexibility to move things around, which is good for more delicate plants such as salad leaves; however you won’t get as large a crop of produce as you would with the space of a rooftop garden!

What's the best thing about the London Gardeners Network so far?

Tell us about the Lily-off

The infamous lily-off! This is a pure bit of fun! I met Charles (of Tipped and Grumblegarden) for a wander through Columbia Road flower market one day and we came across a stall selling all types of exotic lily bulbs. We both bought a ‘Cobra Lily’ bulb and challenged each other to a gardening race! The competition has been chronicled on both of our blogs. Naturally, I’m going to state that I’m in the lead, however I’m sure that Charles would argue otherwise. But again, we’re trying to open up people to the idea that gardening is fun and enjoyable, not a stuffy, middle-aged profession where little old ladies argue about their roses at prestigious flower shows!

I think that many Londoners don’t realize how lucky they are; we live in a fantastically green city with parks and green spaces all over the place. Aside from the rather obvious choice of Kew Gardens and its Palm House, I’ve been in love with Greenwich Park ever since I first walked into it many years ago. It’s at it’s best on a crisp autumn morning when no-one else is around and you have it all to yourself.

Follow Callum's garden at London Vegetable Garden and pick up some brilliant and easy to implement tips on starting your own urban garden at the London Gardeners' Network now.