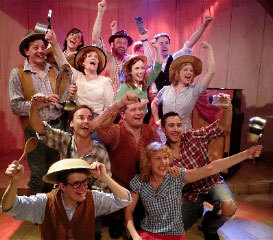 The cast of State Fair
The persistent fondness of Rodgers and Hammerstein for corn-fed country settings is at odds with their gritty New York City upbringing. Nostalgic affection for the farmer and the cowgirl is confirmed by Oklahoma!, Carousel and even Ensign Nellie Forbush marooned on her South Pacific island, sings of being "as corny as Kansas in August"

For State Fair, we're next door in Iowa - coincidentally the 159th annual state fair starts today in Des Moines - with the slightest of plots carrying the wholesome Frake family to the fairgrounds to participate in mincemeat, pickle-making, tractor-pulling and hog-raising competitions, with the young 'uns quite naturally (or as naturally as is possible in stage musicals) meeting their romantic matches. Sandwiched as a project between the successes of Oklahoma! (1943) and Carousel (1945) R&H were clearly up against deadlines to deliver the score and script to 20th Century Fox and reused both lyrics and melodies that had either been cut from other shows, or only lightly adapted from existing songs in their repertoire. In wartime, you make do with the available material.

Early productions featured huge casts and set pieces, and even a live pig on stage. Clearly ushering a live porker up the many stairs to the tiny Finborough theatre would be impossible, but director Thom Southerland achieves a significant feat in shrink-wrapping this monster onto a weeny set with a perspiring cast of 14, for its first European production in 60 years.

In State Fair the principals are age-appropriate castings, unusual in pub theatre where youngsters predominate, Philip Rham credible as the hog-fancying farmer, with Laura Main carrying the most popular melodies - It Might As Well Be Spring, and It's A Grand Night for Singing - as his daughter Margy.

The ensemble deserve most plaudits, though, for populating the midway with a succession of comic characters. Robert Rees and Martin McCarthy were particularly engaging, McCarthy's dance routines being energetically effective on the pocket-handkerchief stage without causing injury to bystanders, and the second act opener when the whole cast play kitchen implements in an anthem to their home state is a peach.

Some of the lines caused unexpected amusement - "I'm aiming for a pearl necklace in the back row" missed its mark in a variety of ways, and "she's a woman who certainly knows her way around a cucumber" generated hilarity not really appropriate for this age of golden innocence.

It's time someone gave this talented director real money and a decent theatre to showcase his passion and understanding of the genre, since his fine versions of Call Me Madam, Mack and Mabel and Annie Get Your Gun have been seen only by handfuls of theatregoers.

And it's time for a revival of "Pal Joey". Are you listening, Cameron?

State Fair is at the Finborough Theatre until 29 August. Tickets £9-13.